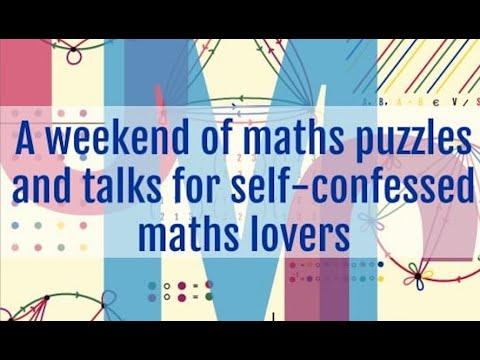 The “competition competition” is MathsJam attendees opportunity to design a competition/puzzle for the other attendees to enter over the course of the weekend. The competition with the most entries wins. This year saw no shortage of creative, challenging and occasionally absurd competitions entered into the competition:

Best attempt at circumvention of the rules while still strictly sticking to the rules went to Rata, for allowing multiple entries.

Richard did a magic trick in which he asked an audience member to stack some dice, then divined the total number of dots on the hidden faces.

Mark introduced us to the Miura fold (ミウラ折り, Miura-ori) - very useful for folding maps as it allows paper to counterintuitively expand in the middle by pulling on two opposite corners.

Check out Mark's website for more details on the Miura fold and other interesting origami projects.

The age-old controversy of Pi vs Tau reared its head once again. Inspired by the Tau Manifesto.

Amy’s talk looked at strategic placement of settlements on a Catan board. [pdf]

As the Olympics were on the same weekend as OMG21, Andre took the opportunity to see how he could mathematically fudge the medal tables in NZ’s favour. With a little bit of work, could NZ come out on top? Is medals-per-capita really our best shot?

You may have heard of Geocaching, but what is it all about? What do you do? Gillian taught us there’s more to it than just walking, with some caches containing puzzles with hints to find the next one.

This talk segued nicely into our MathsjAmbulation activity.

Elizabeth Chesney spoke about her adventures in Knitting Mathematical Knots. She looked at some Mathematical concepts of Knot theory to see how related they were to Number Theory. Knots are classified by the Number of Crossings but if there are multiple different knots with the same number of crossings then these seem to be arbitrarily numbered using subscripts e.g. 71, 72, 73, 74.

Other concepts discussed in Elizabeth's talk were: Equivalence, Prime/Composite, Alternating/Non-alternating (no similar concept in number), the Unknot (Identity) & Unknotting Number (Inverse) and Amphichirality (Perfect). Knot Theory is now used in many different areas.

Every time Rata eats chocolate M&M’s, she can’t help but count the colour distribution. After counting and consuming thousands of M&M’s over the last few years, she has some data on the colour distribution of various M&M’s in NZ. They’re from two sources, a factory in China and one in Australia, and the distributions are different. So, can we use statistics to figure out the likely origin of the mystery M&M tin?

Louis made his best attempt to discredit base-10, pointing out that it’s only because of an evolutionary incident that we have it at all. He introduced a new symbolic system of his own devising for representing numerals instead, and set out to persuade OMG attendees to use it.

Recreational maths has a long and colourful history of calendar calculations – calculating the day of the week for any given date in history. Here we look at methods (from different eras) invented by Vettius Valens and Lewis Carroll.

Chris has provided the archives with a wonderful extended summary of his talk. [pdf]

What is chromaticity? How does colour vision work? Can our screens and printers display any colour visible to humans just by mixing just three colours, and is RGB or CMYK optimal? How many combinations of coloured barcode can Lego Super Mario have? All these questions, and more, investigated in James’ talk.

James referenced two videos providing a deeper explanation for the chromaticity diagram [YouTube], and the science of colour matching [YouTube].

Ross has been thinking about how we count votes, and he has a new system to propose, where everybody’s vote counts...

We were very fortunate to be able to hold OMG21 at the 1066 Medieval Mosaic building, hosted by the mosaic’s creator Michael Linton. The mosaic is a re-creation, and extension, of the famous 1066 Bayeux Tapestry, using ~3 million pieces of spring steel. Michael gave us an introduction to how he made it over the course of three decades, the history of the scenes it depicts, and pointed us towards the puzzle he had hidden inside. Check out 1066.co.nz for more on this fantastic display.

This year we were lucky to have Michael Linton as our keynote speaker. With the help of his son Steven, Michael has produced 2 puzzle books and has a big interest in all aspects of number theory. He is best known for his world record holding giant jersey, and of course for his incredible 1066 Bayeux Tapestry in mosaic form.

In his talk Michael showcased a number of mathematical curiosities, including an 8x8x8 magic cube, Alphametic puzzles, Factor One (a peg board that makes use of human pattern recognition to assist in factoring numbers), and the Ulam Spiral.

Read the article from the Timaru Herald. [stuff.co.nz][pdf]

We've also saved the event poster for the archives. [png]